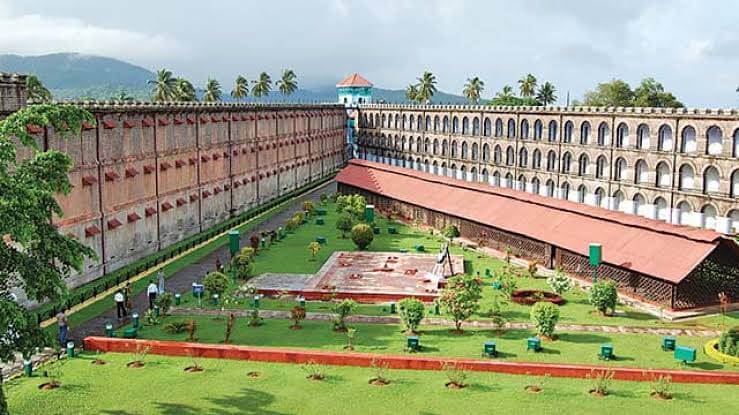 One of the top tourist spots in the Andaman Islands is Cellular jail. The place is a burning memorial to the black days of British colonial imposition in India. Cellular or central jail was once synonymous to the Andaman and “Kalapani” or ‘the black waters’.

In the present day, the jail is a pilgrimage dedicated to the Indian freedom fighters. If you are a nationalist and take deep pride in the sacrifice of the valiant sons of the soil, this is a must-see place for you.

The history of the place dates back to the late nineteenth century, after the first war of Independence, i.e. the Sepoy Mutiny. The foreign rulers tried to crush the indomitable spirit of the brave freedom fighters by deporting them here across the sea, to cut them off from the mainland completely.

For the first time, two hundred mutineers were sent to the islands with jailer David Barry and Major James Pattison Walker. Seven hundred and thirty-three prisoners from Karachi faced the same fate in April 1868. The prisoners from India and Burma were sent at regular intervals. 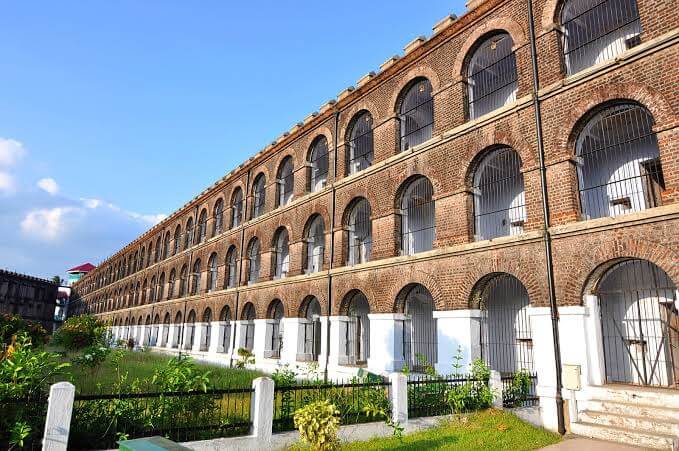 The British rulers started the place to deport all the mutineers, members, and sympathizers of Mughal royal family in India, along with everybody who fought in the mutiny against the British crown.

Initially, there was a separate settlement for the prisoners and the Europeans. However, the number of prisoners here grew in a short time. The resident jailers and other Europeans wanted to transform the place into a horrible and more secure void.

The construction of the present structure of cellular jail began in 1896. The cells were built with deep red bricks brought from Burma. After a decade, the jail was completed in 1906. 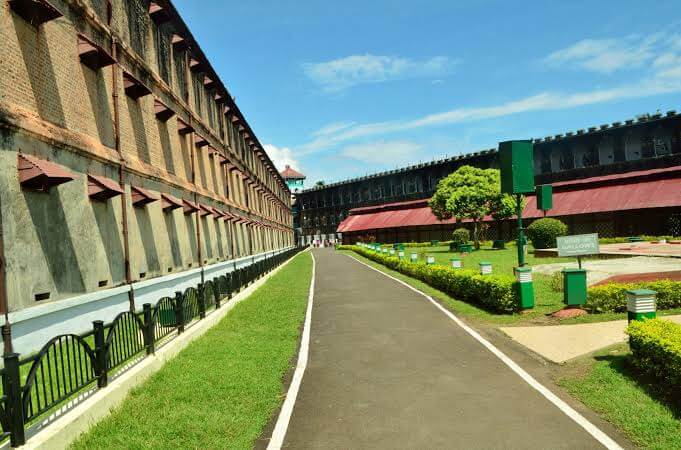 The jail building had seven wings with one central tower and a conical roof on the top. The central watchtower was the place of the guards. As it was at the intersection of the seven wings like a wheel with spokes, the guards could keep constant vigilance over the prisoners.

There was a large bell in the tower to raise the alarm in case of any escape.

The Cellular jail was a place designed to destroy the body and soul of all those who dared to oppose British rule. Soon, the political prisoners from all over India were sent here too with charges of sedition. The seven wing building all had three stories initially.

It housed a total of 698 cells and no dormitory or common housing. Each cell was 4.5 x 2.7 meters or 15×8 feet with one ventilator. The wings were designed in such a way that one wing faced the back of the next one. 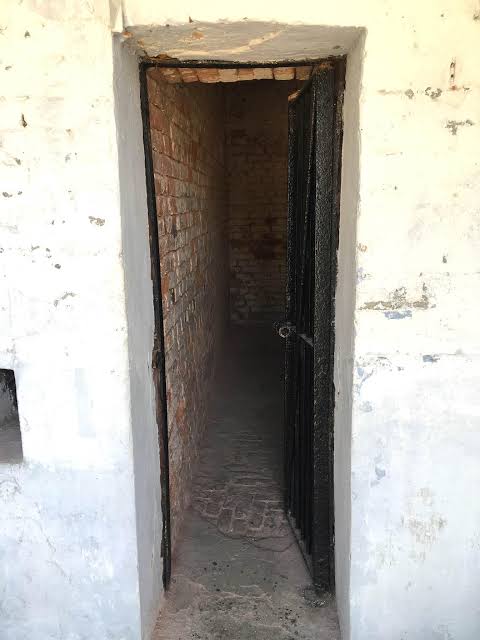 Life of Prisoners Inside the Jail

As a result, there was no communication among the prisoners. It was solitary confinement for all the convicts. This is why the name “Cellular Jail” was used for this establishment, where everyone was in a cell, away from the world.

The only time they could get out was to do slave work under the scorching tropical sun.

The wall around the prison was kept low, to indicate that even if anybody dares to cross them. They will die either by a bullet, by the wild animals in the surrounding jungles, or simply by hunger and thirst. This psychological torture was done with the goal to destroy the spirit of the freedom fighters strategically.

In the time of the Second World War, Japan invaded the Andaman islands in 1942 by carpet bombing from the air and drove the British out. The bombing destroyed two wings of the jail.

The Cellular Jail then housed the British prisoners. Netaji Subhash Chandra Bose visited the islands and Cellular jail in 1943 before hoisting the tricolor flag in Port Blair. At the end of World War II, the British resumed control of the island as well as the jail.

What to see In Andaman Cellular Jail?

A highly popular tourist destination is Cellular Jail. A prime example of the extreme hardships faced by the freedom fighters who put their lives on the line to bring the Independence of the country. You must visit the place to fill your heart with pride and patriotism.

Enter the building by the ticket counter and follow the stairs to the museum in the photos and exhibition gallery. Documents and pictorial proofs of the black colonial days bear witness to the hardships of the brave freedom fighters.

Here, you can see a miniature model of the whole cellular jail with the seven wings, out of which three remain standing to this day. The old photographs gallery and a huge library on freedom movement is a researcher’s paradise.

After the museum, come down the stairs into the green lawn, where the light and sound show takes place in the late afternoon early evening. Here you will find the Martyr’s memorial with models of the flogging stand, oil mill that was powered by the prisoners, various instruments of punishment and torture and last but not the least the gallows. 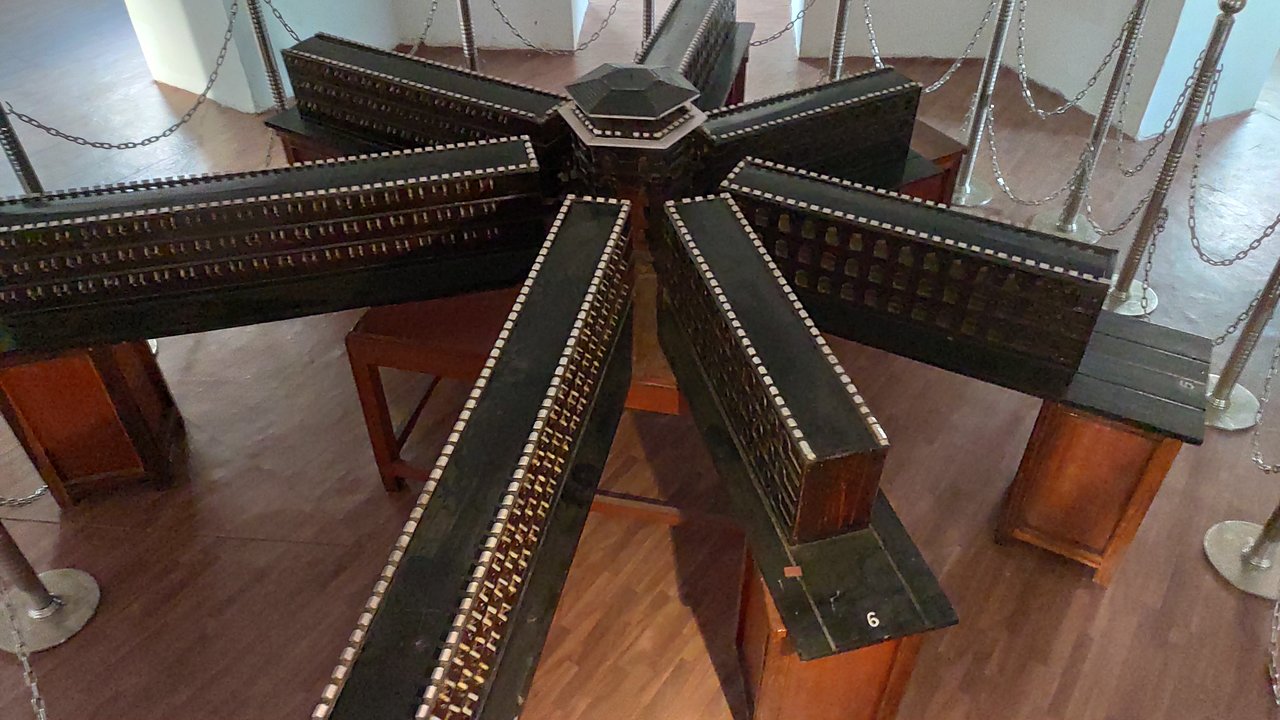 In the functioning days, the gallows were open to demoralize and destroy the spirit of the dissidents. Under the three nooses, there are three trapdoors which connect to a pit, leading to the sea.

Come out of this horror-hole and enter the main prison wing area. Pass by the small cells, which were barely habitable, yet housed the brave sons of the soil for years.

Follow the stairs up and down the compound. Then you will find the names of the freedom fighters, who have spent the bright days of their lives in the darkness of the pit in here. 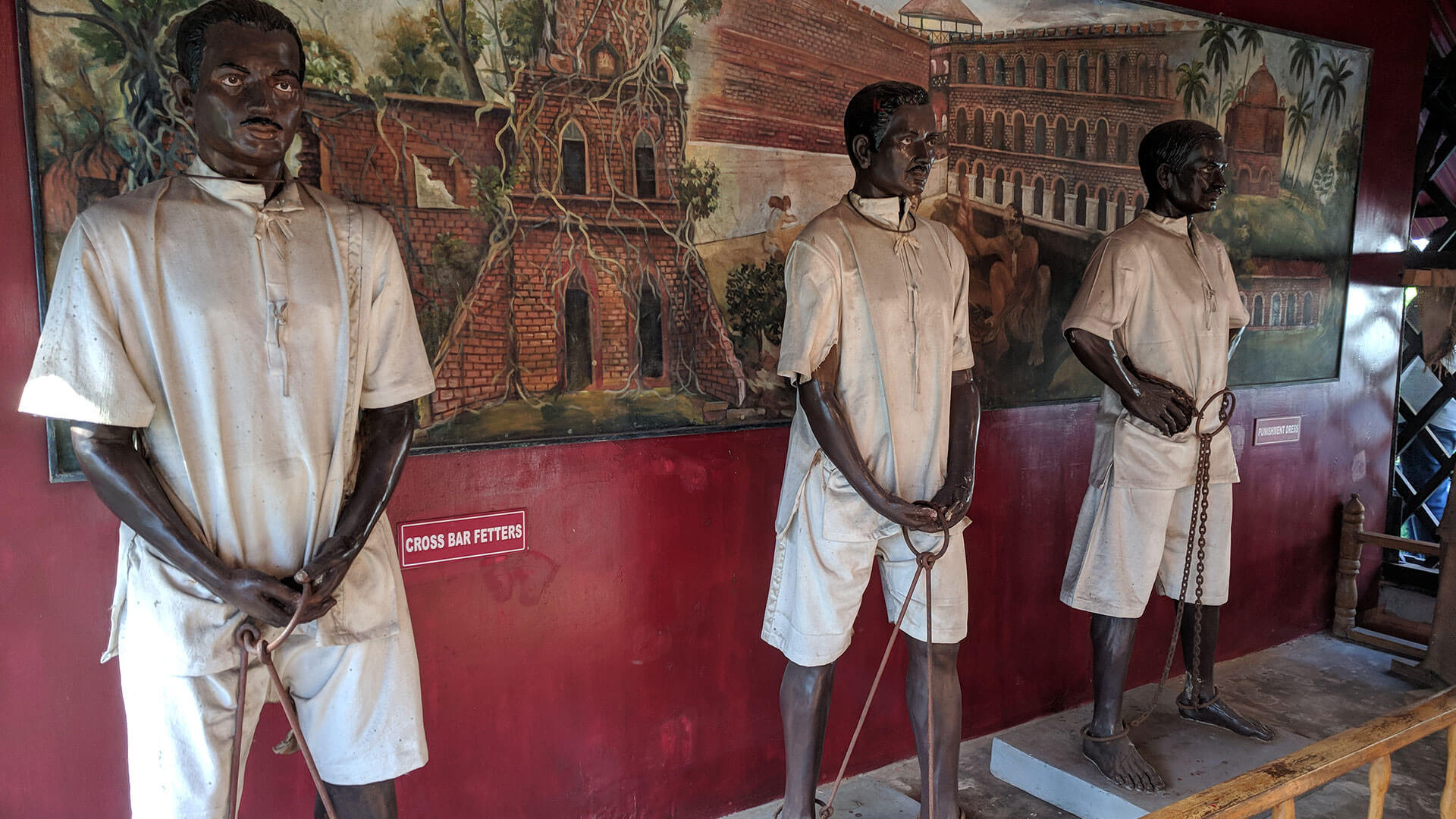 The jailers took a special interest in Veer Savarkar and tried their best to break his spirit. His cell overlooked the gallows. He had to watch his compatriots die one after another, every day. 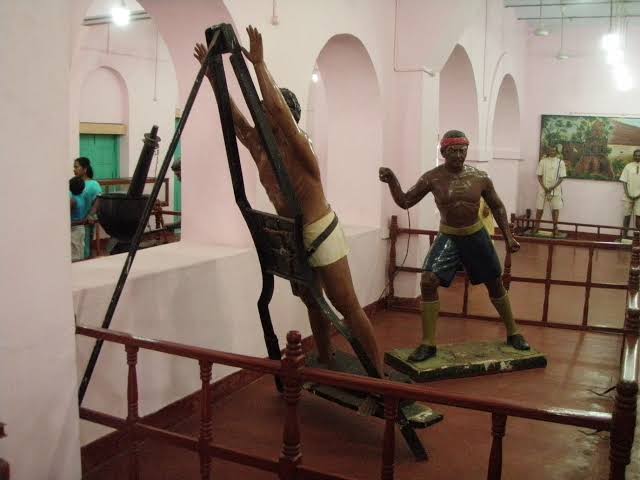 If experiencing this monstrosity suffocates you, go up the tower in the wings by a steep set of stairs. It offers a view of the whole prison-yard along with the nearby sea-beach and part of Port-Blair.

After the wings, come down the stairs to the Veer Savarkar Park and find the statues of Political Prisoners who were deported here.

On the way out of Cellular jail, you will see an eternal flame of Freedom – ‘Swatantrya Jyot’. It is lit in memory of all freedom fighters, martyrs and patriots who have dedicated their lives for the country.

Do Not Miss The Light and sound show in Cellular Jail

One of the most memorable and significant parts of the Cellular Jail tour is the light and sound show. It adds another dimension to the guided tour in the daytime and transports you back in the days when the jail was filled with deported dissidents.

The completely immersive show in the life of the captive patriots begin after sunset every day, but the entry is closed around 5 p.m. The ticket price is ₹50/- per person. Try to book the ticket in advance because of the high demand, and reach beforehand so that you can get a good seat at the front.

The seating arrangement is done on the open ground, where the two wings of the jail meet forming a triangle.

The orator of the chronicles in the Cellular jail is an old Peepal tree in the compound. Mr. Om Puri, a late Bollywood actor voiced and brought the story alive in the words of the tree.

The Peepal tree was there from the beginning and saw numerous freedom fighters arrive in prison, most of whom did not leave the place.

The lights on the two wings bring the story and the narration alive while keeping the spectators completely engaged with tears in their eyes. In the end, the three stories of the jail wing lit up with the three colors of the Indian national flag, filling our hearts with love and reverence for the nation.

The language of the light and sound show is generally in Hindi, while one is in English, so select your preference accordingly.

What to expect Inside the Jail as a Tourist?

Cellular Jail offers you a reckoning, an insight in the horrible past of India under colonialism and unwavering love of the freedom fighters for the nation. It will fill your soul with deep dread to see the conditions of the prisoners here. 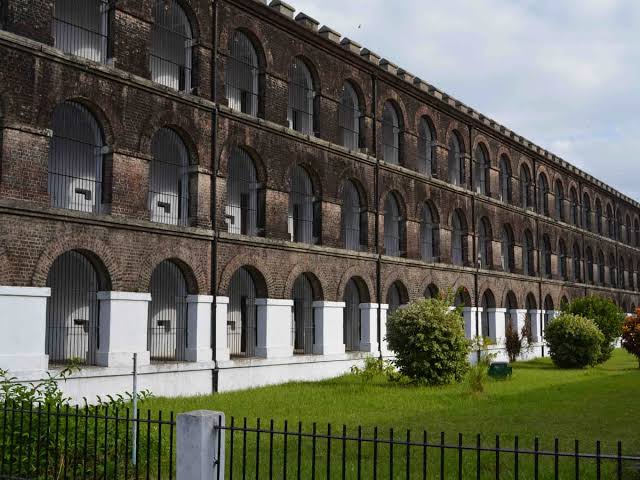 The descriptions here tells the tale of hunger and torture. The prisoners were fed wormy bread, rice with dust and water with insects. Then they had to partake in soul and body destroying slave work. Going a single step out of the line was rewarded with harsh punishment.

You can see the various torture instruments on the compound, like different types of chains to hold the prisoners. They were flogged brutally till the skin came off and they could not move. The gallows were used to torment mentally, showing death come for their friends anytime.

Still, even the fear of death could not stop them from loving the motherland. The Cellular Jail shows us that there were people who didn’t care for themselves and suffered until death. So that we can breathe in the air standing in a free country. 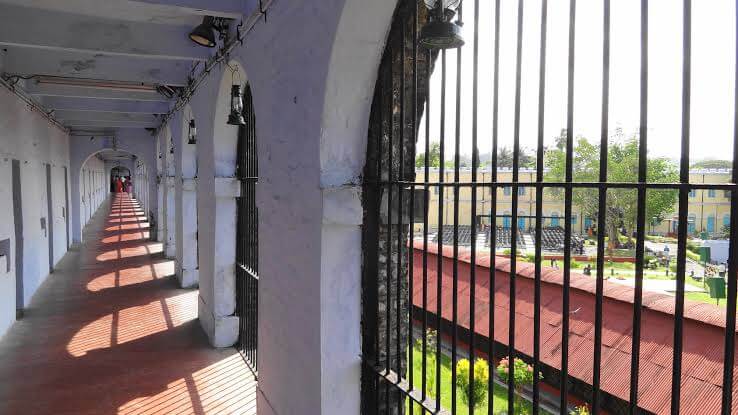 It is one of the darkest chapters of Indian history and it failed to snuff out the light out of the hearts of the freedom fighters. It is our duty to visit this place at least once in our lifetime and pay our respects to the brave heroes of the nation. Try and visit the place in the early morning or in the late afternoon to experience the place to the fullest.

With its great historical value and architectural wonder, the Kaalapaani or Andaman Cellular Jail remains a great attraction for the tourists who are visiting Andaman. This is obviously a must-visit if you are planning to visit Andaman. Also do not miss the awesome light and sound show in the evening. It brings history alive.

So, go there get soaked in the glory of Indian freedom struggle and let that sink in. You are going to end up with a great feeling of gratitude.

Nomadic Weekends is the Fastest Growing Weekend Destinations and Weekend Getaways provider. Get in touch to make your weekends memorable.

You have a story to share? Mail your writing to info@nomadicweekends.com  and we will publish it with due credit to you.